Music.  Dance.  Clay and paint. Yarn, wire, cardboard.  Performances and outings.  Swimming, board games, outdoor games.  Put all this together and you get . . . what?  Chaos, you say?

Not at all, if you’re at CHAW.  At CHAW, you get a Summer Arts Adventure!  For eight weeks every summer, CHAW inside the walls goes beyond the walls with summer camp.  The children get to travel to other lands by being immersed in the visual arts, music, and dance of someplace far from D.C.

This adventurous arts travel takes place every morning; a morning session of camp can be supplemented with something entirely different in the afternoon.  There is recreation camp, which takes the kids on field trips of all kinds, including local swimming pools.  Other afternoon offerings include musical theater camp, ceramics, rock and roll, and photography.   As a parent, this all sounds just grand.  But to really know what CHAW camp is all about, let’s go straight to the source:  the campers themselves.

Vivian with her camp creations

My daughter, Vivian, attended the first session of camp this summer.  This year the sessions are all island arts adventures—Crete, Hawaii, Canary Islands, and Indonesia.  Viv’s camp was Indonesia, and it’s safe to say she loved it.  Yes, LOVE is not too strong a word here.  I asked her why she thought she liked it so much.  “It’s the best because you do different things every day.  It’s not boring,” she said.  Ah, “not boring.”  The highest praise from a 10-year-old.

I attended the Artist Showcase on the last day of camp.  This is an event for the whole family, where each camper’s best pieces of art are displayed and the various age groups perform dances they’ve learned from the culture they’re immersed in.

After the performance, I talked to a few of the campers about what they learned and what they liked.  Azaria Dansby, age 6, was eager to show me a wax drawing.  You’ve probably seen those little sets in stores, where, when you draw, you scratch through a solid waxy surface to beautiful colors below.  Azaria explained to me exactly how they made their own scratch drawings.  She walked me through the process—putting down the layer of color underneath; applying a layer of black waxy crayon on top, then drawing through the black.  Like magic!

Azaria with her wax drawing

When I asked Azaria if she had a favorite thing about camp, a big smile, then, “Swimming!”  This was something she didn’t know she really liked before going to the pool at CHAW camp.

Azaria told me the most interesting thing she learned about Indonesia:  that there are lots and lots of volcanoes there.  She was not quite sure she’d be comfortable living there with all those volcanoes.

Jabez in front of his pastel Bird of Paradise

Nandi Shepherd really enjoyed collage and showed me one of her pieces.  She learned about all the mountains and volcanoes in Indonesia and featured them in a collage.  Nandi liked the idea of taking images of one thing (or various things) and making them into a totally new image.

When I asked about the funniest thing that happened at camp, she and Jabez both agreed:  The Banana Song.  This was a song their counselor made up that they would sing on the van coming back from field trips.  I was treated to a lovely rendition of the number, which starts with peeling and eating the banana and ends with . . . well, I’ll let you think about that.  Hilarity all around! 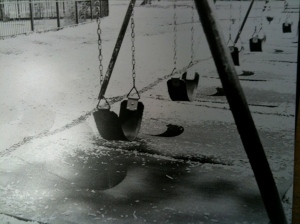 Next I spoke with Audrey Ashdown, age 10, who was in photography camp in the afternoon.  She showed me some of her wonderful playground images and explained how they developed the film in the darkroom.  She went through each step for turning a negative into an actual image; she definitely learned a lot.  I asked her if she remembered a time when all pictures taken with a camera were on film and had to be developed.  I wish I could accurately describe the look on her face as she thought about this concept.  Wonderment, mixed with a sense of the ridiculousness of the whole idea of taking all pictures with film. 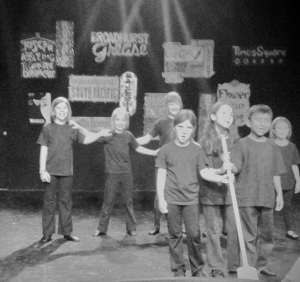 It's the Hard-Knock Life for summer campers

The eight children in Musical Theater Camp were fresh off a stellar afternoon performance for an almost-full house.  They were rightfully proud of themselves, almost giddy—it really was a great performance—and I asked them to tell me if they could remember how they felt on the first day of camp compared to now.  Javier Benson said, “When I saw we were going to learn 11 songs in two weeks, and dances to go with them, I thought we couldn’t do it .”  His cast-mates agreed wholeheartedly.  But, as Maya Bravo and Lily Smeltzer pointed out, “We did it!”

When asked what the funniest moment in Musical Theater camp was, Lucinda Cantwell and Caroline Watterson said, “The bug!”  The whole group burst into giggles “Oh, yeah, that was so funny!  Yeah, remember that?”  I need more detail, I said.  Vivian said, “Someone brought in a cicada and Miss Laura (Petravage, their director) totally freaked out because she hates bugs.”  Oh, well bugs can be kind of gross, I said.  “But it was dead, in a plastic box!  And she screamed and ran away!”  the kids said.  Much more laughter at the memory of that reaction.

I’m sorry, Laura, after producing a wonderful musical revue in two weeks with a group of 8 to 10-year-olds, their fondest memory is you screaming away from a dead bug in a plastic case. 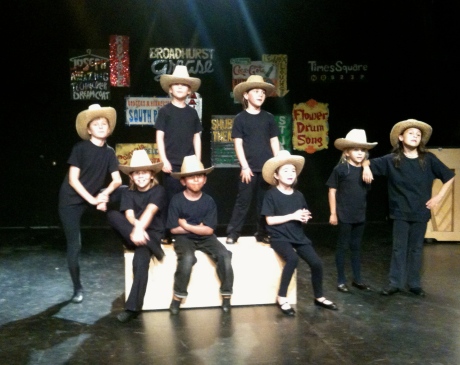 Oh, What a Beautiful Morning! for CHAW campers

I asked the group what their favorite numbers were to perform.  Hello, Dolly! got a number of votes.  “Oh, but also Oklahoma.”  Agreement from the group.  “Oh, and It’s the Hard-Knock Life.”  Oh, yes, yes, most agreed.  “What About Do-Re-Mi?”  Oh, right, that one too.  Their enjoyment of each number certainly showed in the performance.  Jill Strachan, CHAW’s Executive Director, singer, and director of CHAW’s annual Gilbert and Sullivan production, shed a few tears of happiness during the show because the children’s performance was so delightful.

Now Vivian’s paintings and drawings are displayed at home, and the ceramics have found their place on the shelf.  We sing snippets of the summer’s favorite show tunes through the day.  Vivian has already made plans to attend CHAW camp next summer.

And I’m wondering if I could gather enough friends and neighbors to demand a Summer Arts Adventure for grown-ups.