One year, eleven incredible artists: we are reaching the end of our first series of Mind of the Artist, featuring some of the talented, creative, diverse artists of the Capitol Hill Art League (CHAL).  We are so proud to have CHAL as an integral part of our CHAW community, and especially happy to be able to share some of their stories.  Some have been artists for their entire lives, others have rediscovered a passion, and still others picked it up late in the game–but each story is a reminder that ultimately, the artistic journey is individual: there is no one “right” way to find art or to explore it.  Jill Finsen is a fantastic example of someone who has dived right into her passion–and is REALLY going for it.  Read on to find out just exactly how she’s doing that, and how she arrived at that truly exciting place in her artistic development.

My first remembered interest in art was when I was given a Brownie camera as a child. I fell in love with black and white photography immediately. My dad taught me some basics and then I pursued instruction through courses after college at the Cambridge Adult Education Center and set up a rudimentary darkroom in my Cambridge apartment. After leaving the Boston area I dabbled a bit and later reignited my passion when AARP, the organization for which I worked, undertook a major reorganization.

I decided I needed a more serious diversion to supplement work and took a series of courses at The Maine Photographic Workshop in traditional and non-traditional black and white photo processes. When I began a new job at AARP, I was asked to include honoring the public policy volunteers who I staffed through a photograph. I was given the time to make studies of the volunteers around the country honoring them in individual ways. One woman was a pilot and we were able to make the photograph at National Airport when one could still get on the airport field. Another was from Hawaii: she is placed at the Botanical Gardens, sitting with shoes off. And I photographed a die-hard New Yorker on the Staten Island Ferry with the Statue of Liberty in the background. I was so fortunate to be staffing policy development and spending many wonderful hours in the darkroom to produce a series of portraits for AARP’s national office. I also pursued courses at The Corcoran School of Art and Design and Northern Virginia Community College. I built a darkroom with other Corcoran open-program students. 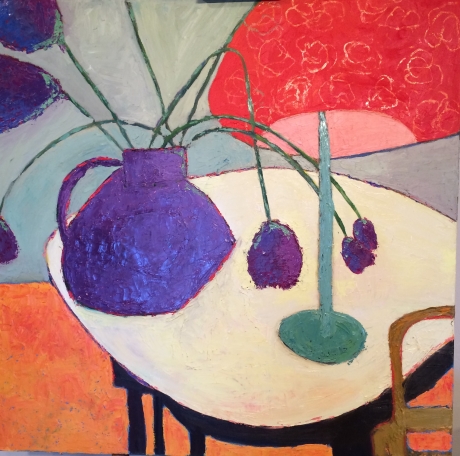 My entry into drawing and painting classes began about 15 years ago. I got hooked on exploring ways to express myself through oil paint. My paintings dangle somewhere between abstraction and representation. Perhaps my work can be called modernist but I find it challenging to label it. I studied at the Art League and Rob Vander Zee School of Painting. Increasingly I found myself wanting to spend more time painting and when AARP offered a buyout during a staff reduction in 2009, I took it even though I had not planned to retire quite yet and knew it meant tightening my financial belt considerably. 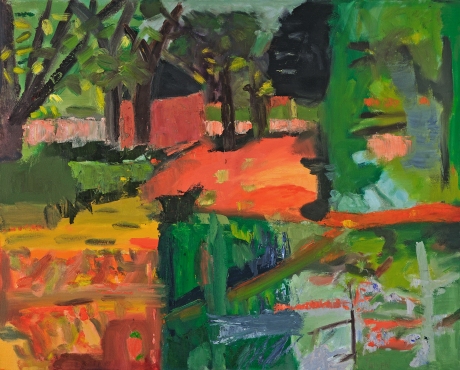 I had a wonderful career at AARP but have been grateful for the opportunity to pursue my art. Since then I have painted full time and availed myself of workshops and opportunities to stretch—including three intense workshops, called Marathons, from the New York Studio School of Drawing, Painting and Sculpture (NYSS)—ten-day, 12-hours-per-day sessions. During the last one I yearned for a longer stretch of that intensity that challenged me and influenced my personal work significantly. I began discussions with NYSS’s dean, Graham Nickson, about the possibility of pursuing a Masters of Fine Arts in Painting. And by the time this article is published, I will have begun my two-year journey to delve further into painting and drawing at this small school, the original home of the Whitney Museum of American Art, which was established in 1964. I have relocated to New York for the duration while maintaining my membership in CHAL and hopefully will have an MFA in Painting in hand when I turn 71. It will be my birthday present to myself.

Learn more & find many of Jill’s works on her WEBSITE.

And on that CHAWsome note: what a way to end 2016! We’ll be back in January with a fresh batch of artistic minds to explore.  Until then: CHAL & CHAW wish you the happiest of holidays, and can’t wait to see you for a creative new year in 2017.